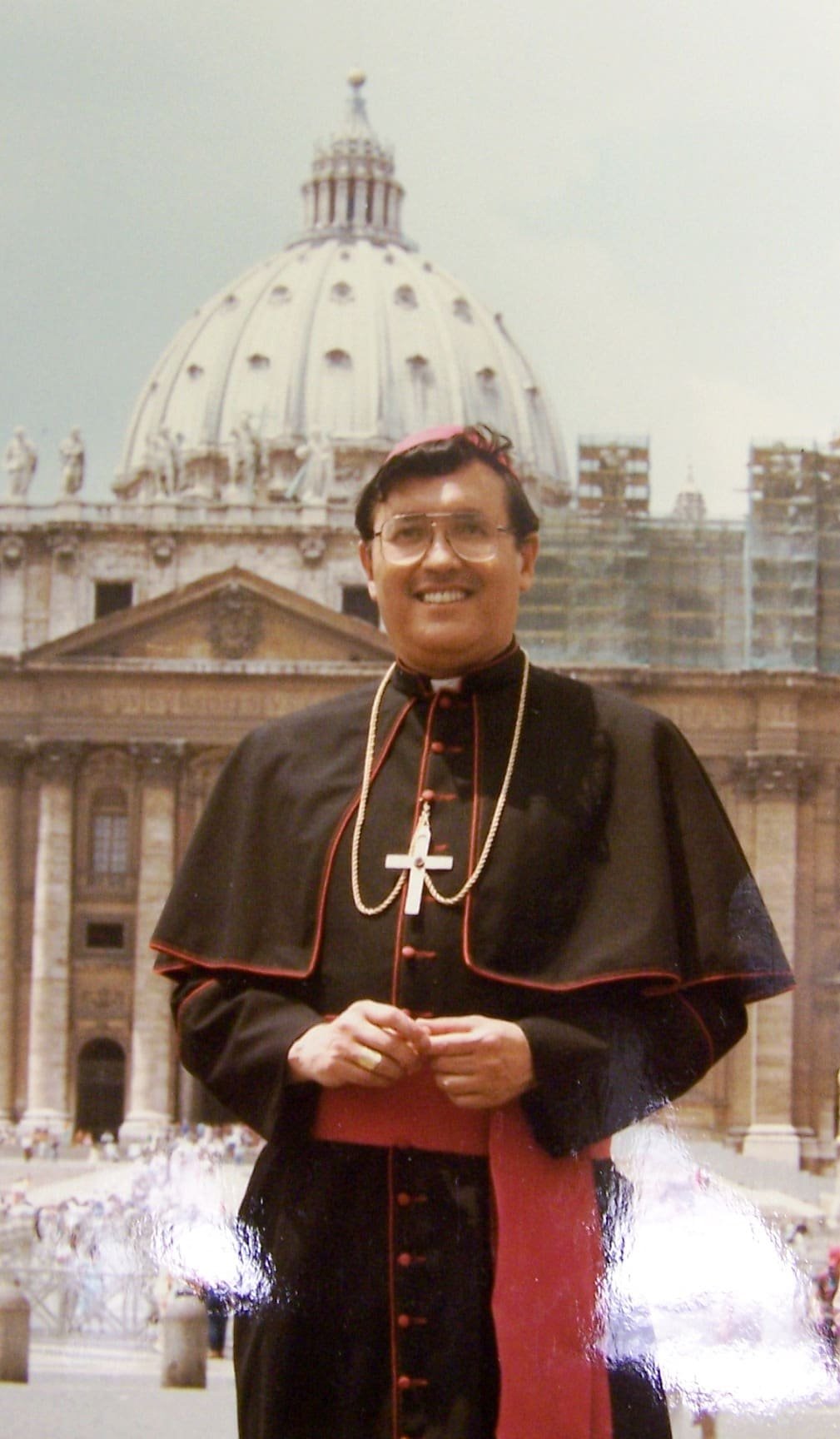 October 6, 2020 marks the 29th anniversary of the death of Venerable Alfonso Gallegos, Augustinian Recollect and former Auxiliary Bishop of Sacramento, California.His memory and legacy continue to live in the hearts of those he encountered.

Saint Teresa of Calcutta is quoted as saying:

“Spread love everywhere you go. Let no one ever come to you without leaving happier.”

Those who were blessed to meet Bishop Gallegos left happier and felt appreciated as human beings. Even if that encounter was brief as in the case of Stephen M. Bauer who met him in the 1980s at a St. Patrick’s Day fundraiser: “I was a volunteer bartender, and so I was in a position to observe him interacting with everyone else. Previously, I had never heard of him. Before the dinner started, however, he came up to me and introduced himself. I believe he told me to just call him Al. He was a warm, very outgoing, ‘people’ person and not the least bit stiff, aloof or patronizing. You would never know he was a Bishop! My own personal conversation with him lasted probably less than sixty seconds. And yet for those few seconds, I felt profoundly valued as a person. I have never forgotten that.”

His former secretary Olympia Nuñez recalls his humble soul and pure spirit. “He was so kind and cheerful and he tried to convey that to the people, among personal suffering to be kind and cheerful. He would often say: ‘What a beautiful day!’ He was so optimistic.”

AldoNuñezwho was an altar boy at Cristo Rey Church, Los Angeles, when Gallegos was pastor there says: “I remember his great smile, his laughter, his love of life, love for people and God. He conveyed that love to all of us. He always reminded the youth to have God in mind in all of our actions. He was able to lead me away from gangs and drugs without pushing me out of it, but talking to me and encouraging me to do God’s will, in a kind way. I really do hope that in my lifetime I see him become a saint.”

Bishop Gallegos has left a lasting memory in the hearts of many and continues to touch many lives with his inspirational life story of kindness and love. His journey was remarkable: overcoming his lifetime struggles with myopia with fortitude and faith and going on to become a religious, a priest and a bishop.

Love is what remains and is remembered. That reality is captured beautifully in St. Paul’s first letter to the Corinthians: “Love never fails. If there are prophecies, they will be brought to nothing; if tongues, they will cease; if knowledge, it will be brought to nothing. So faith, hope, love remain, these three; but the greatest of these is love.” (1 Corinthians 13:8-13)

Bishop Alfonso Gallegos is remembered 29 years after his death because he faithfully lived out the commandment of Jesus Christ to “Love one another,” and in so doing spread love wherever he went.Whoever encountered him left happier after meeting him, and that is why he is still remembered to this day.

Alfonso Gallegos was ordained a priest in the Order of Augustinian Recollects in 1958 and appointed Auxiliary Bishop of Sacramento, California in 1981. He served in New York, Los Angeles and Sacramento. His cause of canonization was opened in December 2005 and he was declared Venerable by Pope Francis in 2016. His mortal remains rest in Our Lady of Guadalupe Church in Sacramento.